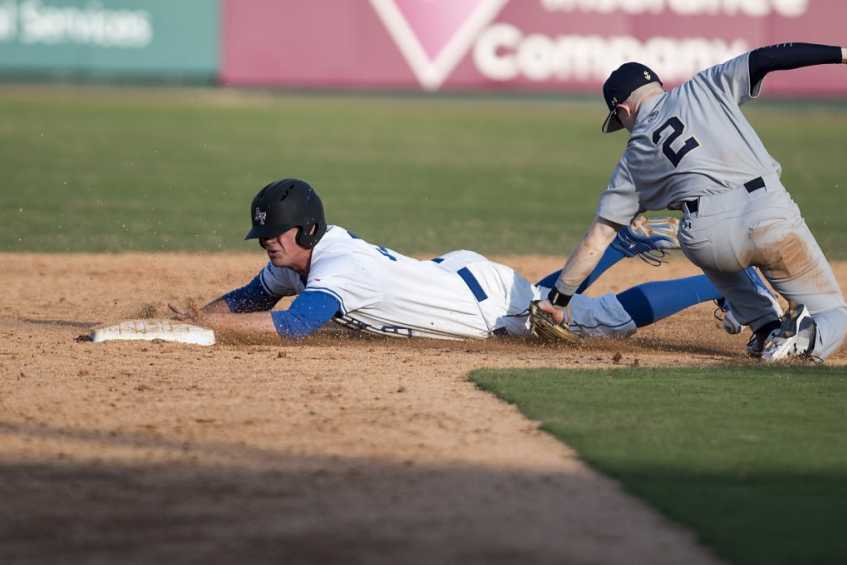 It is exciting to watch young talent develop, as that has been the business I have been in for the past twenty-five years, helping young ball-players develop baseball skills. It's cool to be able to say, "I knew them when, no matter what field of work they end up in."

Since turning to writing the last couple of years, it is equally exciting to watch and follow young baseball writers, as Melissa Verge. She writes with such a humorous self-wit and innocent charm that makes even reading about the Toronto Blue Jays exiting. Just kidding there, but most of my readers are probably not Blue Jays fans, especially with their rough start to an expected big season. Melissa Verge's writing may be their only highlight this season and you can check out Melissa's blog, The Thrills and Spills of Being a Blue Jays Fan.

Pretty amazing stuff, as at the age of seventeen, I had trouble just writing my name. Additionally, Melissa, plays baseball, and may have a big future in the game, as she pitches the dreaded knuckle ball the next R.A. Dickey? Good luck to Melissa Verge with writing and baseball playing.

Anyone out there know of other interesting stories of young people, writers or players, let me know as I enjoy interviewing the up and coming stars of tomorrow.

Jack Perconte: With more spills than thrills so far, have the Toronto Blue Jay fans begun to jump off the bandwagon yet?

Melissa Verge: Well, I think because of a twenty-year playoff drought, it's easier for Blue Jays fans to give up hope when the season starts off rough, rather than risk unnecessary heart break later on. As for jumping off the bandwagon, in the heat of a disappointing loss, it's easy to get angry and put down your team. In the long run I think Jays fans, who know something about baseball, know that this is not a 40 game season, and they're still supporting the players 99% of the time.

Jack Perconte: In case a managerial change is necessary, will you throw your hat into the ring and if so, what do you plan to do to turn the ship around to the expected World Series run?

Melissa Verge: In all seriousness, yes I would. If it was legal to hire a 17 year old manager, I would throw my hat into the ring in a second. The thing is, I have no idea what I would do to help the Blue Jays get out of the slump they're in. It's a tough job, there's only so much one person can do from the bench to help his team win. It could bethat the Jays are crackingunder all thepressure and high expectations set for them, and maybe a boost of self-confidence is what they need.

Jack Perconte: On an equally un-serious note and from a United States observer's perspective, what is the reason you decided to write about the Blue Jays and not the Maple Leafs?

Jack: If a hundred Canadian sport fans are offered free tickets to a hockey game or a baseball game on the same night at the same time, how many go to each?

Melissa: In general, I think 60 would go to the hockey game, and 40 would go to watch baseball. In Canada hockey just carries more weight, but I hope if the Jays can make a playoff run this year, more Canadians will turn to baseball as their selected form of entertainment.

Jack: Where did your love of baseball and your desire to write begin?

Melissa: My love of baseball started way back when I played my first game at 5 years old. It developed more when I became a pitcher, when I found that I enjoyed the pressure of locating every pitch and being the center of attention on the field. Some of my earliest childhood memories have been made on a baseball field. As for writing, it's always been something that comes easier than other things for me, and I find it extremely rewarding to express my feelings through words. When my two passions baseball and writing combined, it was like I knew that this is was what I was meant to do.

Jack: Favorite class in high school (it must be writing) and college plans, yet?

Melissa: I have to say I love Journalism. We have an online magazine that we write articles for, and there's something so relaxing and enjoyable about spending the class pen and paper in hand, scribbling away. I feel like taking it is actually benefiting me for later on in life.

Jack: Give us a scouting report on Melissa Verge, the baseball player, and as to how your season is going so far.

Melissa: Melissa Verge the baseball player... well, unfortunately my season doesn't start until late May, so right now I'm in the midst of preparing for it. My knuckle ball has improved a lot over theoff season and I'm hoping that I can use it as my primary pitch this year. I feel a lot more prepared going into this season than I didlast year, so right now it's looking like it will be a good one. Of course, the Blue Jays looked good on paper, and now they're leading the American League East in losses, so you never know.

Jack: Who is your favorite Toronto Blue Jay player, then and now, and why?

Melissa: Well I love Duane Ward. He was obviously an amazing relief pitcher for the Jays during their two World Series wins. I had the opportunity to meet him last summer, and he is also a really nice person. (He takes time during the summer to help out with amateur baseball across Canada, teaching kids like myself.) He had a great sense of humor, and I will never forget when he said, "Umpires are blind in one eye and can't see out of the other." As for right now, R.A. Dickey is a guy I look up to. He's had to go through tough struggles both in his personal life, and on the baseball field. I'm a knuckleball pitcher, and I love how I can look up to a guy like him on the diamond.

Jack: Are you hassled by friends and or family for being such a baseball fan? And do your friends read your blog?

Melissa: Sometimes my parents get upset that I'm concentrating so much on baseball instead of school, so yes, I get hassled quite a bit at home. Not to many (well, none) of my friends love baseball like I do, so I try to leave it out of the conversation to avoid anyone falling asleep on me. Actually, some of my friends who have no interest in baseball have checked out my blog though, and it's flattering to hear them say they enjoyed it. At first I was embarrassed, and I wanted to keep the baseball loving part of me separate from the school me, but I've became more comfortable now with sharing the "baseball writing me" with kids my own age.

Jack: Where do you see yourself ten years from now?

Melissa: Ten years from now I see myself as on my way to becoming an accomplished Sports Journalist, covering the Blue Jays. I'm not sure if I have the type of writing websites like the Toronto Blue Jays would publish, but I'd be content with keeping my own website and publishing interviews with the players and my own thoughts on there. In ten years, I hope to be a known name in the Sports Industry and the Toronto Blue Jays organization.