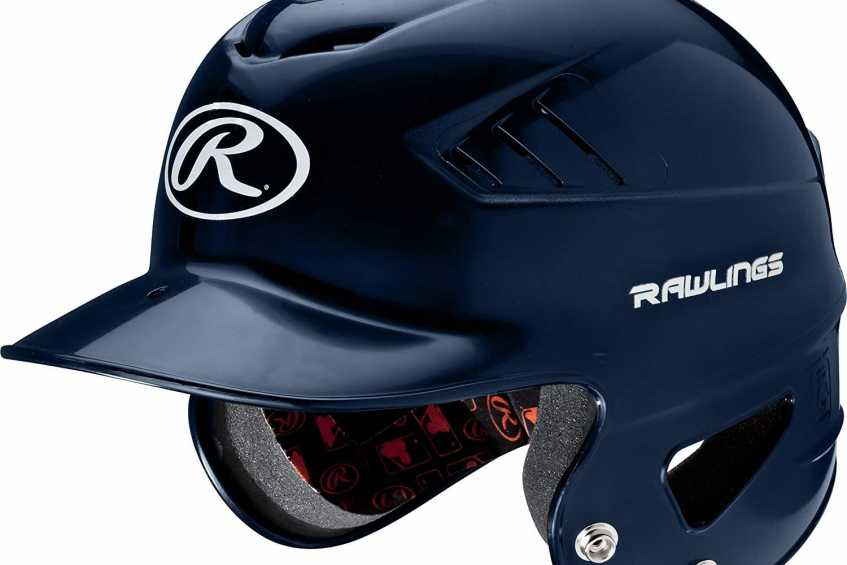 All Major League Baseball players need batting helmets and so do the smallest t-ball players.

Rawlings, one of the biggest names in sports equipment, makes the Coolflo t-ball helmet for that budding superstar slugger in your family.

Why is the Rawlings Coolflo T-Ball Helmet Needed?

At first, it may appear that a batting helmet isn't necessary in t-ball. After all, the batter doesn't have to dodge 105 mph fastballs aimed at his head.

The ball isn't even thrown at the batter. The ball rests on a waist-high tee. The batter is, therefore, swinging at a stationary target. What could go wrong?

Back in the mid-90s, the American Academy of Pediatrics Committee on Sports Medicine and Fitness issued a policy statement on baseball and softball injuries in children.

The committee noted that t-ball among children as young as five was a contributor to an estimated 162,000 youth baseball and softball injuries that were treated in American emergency rooms in 1995.

Interestingly, those figures do not include players over 14. You would think that most injuries would occur among older players who are throwing harder and swinging faster, but the injury rates peak before players reach their teens.

Of the injuries reported that year, 37% were contusions (bruises) and abrasions (cuts and scrapes) while 26% were fractures. The other injuries included concussions, dental injuries, internal injuries, sprains, and strains.

To limit the occurrence and seriousness of injuries, the committee recommended that t-ball leagues use only softer baseball and softballs that have been approved by the National Operating Committee on Standards for Athletic Equipment (NOCSAE).

In fact, the committee said that particularly children under 10 should use the lowest-impact version of a ball that's available.

Then in 2008, the USA Medical / Safety Advisory Committee released a similar recommendation.

It becomes obvious why wearing a batting helmet in t-ball is the wise thing to do.

The written statement by the American Academy of Pediatrics Committee on Sports Medicine and Fitness said that at the time of their findings, baseball had the distinction of being the leading sport for eye injuries to children.

A case in point is the $4.5 million lawsuit filed in 2014 by the New York father of a t-ball player.

The father alleges that a jagged portion of a plastic bat broke off, injuring his son in the face. According to the lawsuit, the cuts required over 300 stitches.

The Coolflo helmet comes with holes pre-drilled for the addition of a faceguard. Some leagues make faceguards mandatory. If your kid's t-ball league does not, the use of a faceguard is still something that your family will want to consider.

The Coolflo is manufactured and sold by Rawlings, a trusted leader in the field of sports equipment.

When you send your kid onto the baseball field, you want to know that you've given him top quality equipment to keep him safe.

There's comfort in seeing the same brand name on your kid's helmet that you see on Major League Baseball equipment.

You won't worry that your kid is wearing an item that doesn't measure up to the demands of the game because the Coolflo by Rawlings meets the rigid standards of America's NOCSAE.

It's easily adaptable with its pre-drilled holes for a faceguard as well as its snaps for a chinstrap.

Not only will your kid look cool, but he'll stay cool with the Coolflo's 15 air vents. There's even a ponytail channel.

The Coolflo has a double ear design, so both sides of the head are fully protected.

To increase the chances of getting the properly sized helmet for your kid, measure his head's circumference. You should wrap the tape measure around his head just above the ears.

A circumference measurement of 20 to 20 Â½ inches equates to extra-small. A medium would measure 21 Â½ to 22 inches.

The Rawlings Coolflo is available on Amazon for $19.99.

Parents on Amazon tend to praise the Coolflo's fit. The dual density foam holds the helmet in place for even kids who can't sit still.

One of the ongoing complaints about team-issued batting helmets is that they tend to be too large for the youngest players' heads. The bats move around so much that the t-ballers begin looking less like baseball players and more like bobblehead dolls.

Purchasers appreciate that Rawlings makes a helmet for the youngest players.

T-ball players are often as young as five. In some areas, there are t-ball leagues for players under five.

Finding a helmet that's suitable for small players is a challenge. But one Amazon buyer said the Coolflo was perfect for her four-year-old. In fact, most of the praise for this helmet by Amazon customers deal with the fact that they finally found the right helmet for an undersized player.

Some purchasers liked the helmet so well that they bought additional ones for other members of the team so that the kids wouldn't have to share. As one parent expressed it, letting each player have his own helmet is an excellent way to reduce the likelihood of lice.

One parent said that he was blown away by how much quality he received in the helmet.

How the Rawlings Coolflo T-Ball Helmet Compares to other Helmets

The market for t-ball helmets isn't crowded, but there are several competitors. Some companies like Rawlings offer more than one type or style of helmet.

Rawlings knows how to make your t-baller feel like he's on his way to Cooperstown.

The company's MLB Clear Coat helmets look like the headgear that Major League players wear. There's nothing childlike about them.

As the name says, the helmets shine with a clear coat paint job that's astonishing in a product created for kids that may not even be old enough to go to school.

The helmets meet all required NOCSAE standards. They also come with the usual Rawlings pre-drilled holes for a faceguard and snaps for a chinstrap.

Like Rawlings' Coolflo model, the MLB helmets fit sizes down to 6 Â¼.

The customer reviews on Amazon are stellar.

Liven up t-ball with one of Rawlings Storm helmets. They're the same as the Coolflo helmet but with a â€œstormâ€ crackled paint scheme in either neon pink or neon purple.

They're perfect if you have a kid who likes to stand out from the crowd.

The Storm series comes with the same pre-drilled holes for a faceguard and snaps for a chinstrap.

The level of protection offered by the Storm series is identical to that of the regular Coolflo helmets. They're made of the same strenuously tested materials.

However, the price varies. You're going to pay extra. Looking cool comes at a cost.

However, one player complained to her mother the neon purple is more of a fuchsia or pinkish purple.

The reviews on Amazon are generally favorable.

However, unlike the Rawlings Coolflo, the All-Star System 7 t-ball helmet starts at a size 6 Â¾. Therefore, it won't comfortably fit the smallest t-ball players as will the Coolflo that accommodates a size 6 Â¼.

That half an inch is important in hat sizes. It's even more important when you're talking about a piece of safety equipment.

You want your kid's helmet to stay where it should. That's a problem if the helmet is half an inch too large.

The All-Star helmet has one large air vent while the Rawlings Coolflo boasts 15 ventilation openings.

The All-Star System 7 does offer a notably convenient feature that you don't get with the Coolflo. When you order the helmet, you can also order the matching faceguard and chinstrap.

The helmet alone is available on Amazon for $37.50. If your order includes the faceguard and chinstrap, the total cost is $59.50.

Some leagues demand that players wear faceguards. When helmets come without the faceguard, parents complain that they spend too much time trying to find a compatible model to attach to the helmet. All-Star wisely eliminates that hassle.

Similar to the Rawlings Coolflo, the Champro helmet makes special allowance for ponytails.

Also, like the Coolflo, the Champro doesn't come with a faceguard or chinstrap but has pre-drilled holes and hardware in place to accommodate them.

The company notes that its faceguard can conveniently be attached with either a flat blade or Phillips screwdriver.

The Champro's dual density padding makes the helmet steady on especially small heads. In fact, the Champro helmet boasts a size even smaller than that of the Coolflo â€” size six.

The helmet's shell is high-impact ABS and meets the NOCSAE standard.

The price for the Champro model on Amazon differs according to the color. The basic black model is the least expensive at $30.99.

The scarlet-colored helmet costs $31.37 while both the navy and royal blue versions are $43.49.

Easton matches the Champro in size. It also fits a size 6. That's a quarter of an inch smaller than the Rawlings Coolflo.

The Easton model has great reviews on Amazon. Relieved parents express their joy over finding, at last, a helmet that fits their kid.

One parent wrote that the Easton fits her three-year-old who weighs less than 40 pounds.

The Easton sports a high-impact ABS shell over EVA impact foam. The comfort foam against your child's skin is designed to wick moisture away on those overwhelmingly hot days.

The foam also has antimicrobial properties to keep the helmet smelling as nicely as it looks.

If you don't like the wideness of some other helmets, you may like this one. The Easton has a slimmer profile than its competitors.

You can purchase the Easton Natural Solid t-ball helmet on Amazon for $19.96.

The Easton ships without a faceguard or chinstrap as does the Coolflo. And like that Rawlings model, the Easton helmet has pre-drilled holes for a faceguard along with snaps for the chinstrap.

What We Think of the Rawlings Coolflo T-Ball Helmet

We know that you don't want to skimp on quality when it comes to the headgear that will be protecting your child.

In that case, we have good news for you. All the helmets mentioned above are up to the task of keeping your little t-baller safe.

Because all the helmets we talked about are safe, our final recommendation is decided by the features that a model or company possesses.

The Rawlings Cooflo series is an excellent place to start. We love the extra ventilation it provides, including room for a ponytail.

We also appreciate the price point for both the Coolflo and the Easton. It's nice to know that you can purchase a top-quality batting helmet for less than the price of a meal at a nice restaurant.

If you have a stylish kid, Rawlings offers the Coolflo with a crackled neon paint scheme that we think is rather cool. It's important to emphasize once again that the whimsical paint job in no way indicates that the helmet underneath is anything but a serious piece of headgear. None of the Rawlings safety technology is missing from the helmet.

The Coolflo should fit most t-ballers. However, if your player is smaller than average, consider the Easton and the Champro helmets.

If even their helmets are too large for your kid, maybe you shouldn't sign him up for t-ball until he's at least old enough to walk.

END_OF_DOCUMENT_TOKEN_TO_BE_REPLACED

There are 0 comments on "Rawlings Coolflo T-Ball Helmet"