No Radar Gun, No Problem - 365 Days to Better Baseball

I have never met a young ball player, who does not like to see how fast he can throw a baseball. Of course, most people do not have a radar gun around to check ball players' throwing speeds and that is probably good, as it is not good to have player's thinking about speed very often. 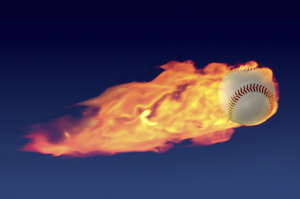 However, developing more arm speed and "lighting up the radar gun" is important for players to move up in baseball levels from year to year. Many kids do not develop enough arm speed to be able to make the throws at the higher levels of baseball, especially into high school where the field dimensions are the same as a major league diamond.

Most baseball people know what long toss is and the value it has for developing arm strength. Long toss is when players warm up and continually back up in distance from their target until they have maxed out in distance with balls thrown on a line with only minimal arc on the throws. The faster the arm speed the farther the ball goes and the higher the radar gun speed would be. It is similar to hitting as the more bat speed, the farther the ball is capable of going.

With that in mind, coaches march off the distance that players can throw the ball. It is probably best to average about 5 of the longest throws to get a true measure of the players arm strength. Once an average is taken, coaches should write this distance down, just like knowing their radar speed. Anytime players want to see if their arm strength (radar gun throwing speed) is improving, they simply have to do the long toss again and measure the steps.

Once again, more distance indicates more arm speed. As mentioned, proper warm up is necessary and long toss is not good for tired arms. This method has the additional result of encouraging players to long-toss to develop arm strength, as they love to know if they are increasing their radar gun throwing speed. Finally, as written about in an earlier post, correct throwing mechanics are necessary when long tossing or the benefits are negated along with the risk of injury.

END_OF_DOCUMENT_TOKEN_TO_BE_REPLACED

There are 0 comments on "No Radar Gun, No Problem - 365 Days to Better Baseball"