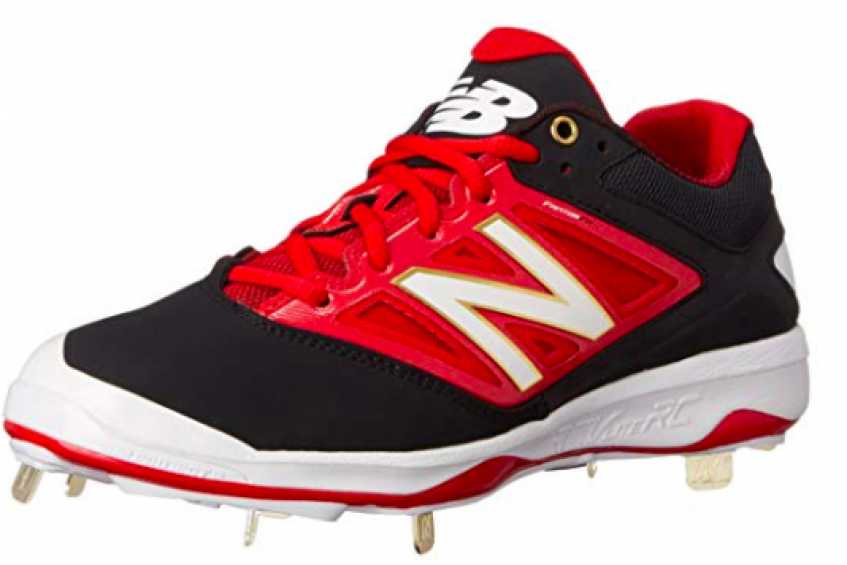 The New Balance L4040v3 has a lot of the same features as the 3000v3. However, there are some innovations as well. For one, New Balance as added more comfort, with their full-length REVlite foam cushion, and they have thrown in a bunch of shoe technology to boot. Here is a look at the full specs o the new L4040V3:

*In order to develop this new cleat, New Balance collected data from all levels of baseball play in order to create a pressure-mapping system that studied how players used their feet to generate power and speed. They then applied this knowledge in their new "Data Driven Platform" inside of the L4040V3 baseball cleat. The upshot is an innovative integrated system (by combining the midsole and insert technologies) that supports players' feet in terms of how a cleat can support power and speed on the ballfield.

Founded in 1906 in the greater Boston area by William J. Riley, New Balance boasts an unwavering "commitment to quality and craftsmanship." With products manufactured in the U.S., the shoe-maker has always touted high-performance gear that featured new technologies, like "blended-gel inserts, heel counters, and new, lightweight material."

Plus, with a penchant to "do thing their own way and an independent streak the size of Bean Town itself, New Balance uses only high-quality materials and promises to help athletes "achieve their goals" by offer more sizes than any other shoemaker.

As a result of trailblazing new shoe territory, as of 2015, the company was reported to be worth somewhere in the range of 3.7 billion dollars, with over 5,000 workers worldwide. Currently, New Balance manufactures athletic shoes, walking shoes, sports equipment, apparel, and, of all things, Cricket bats (hey, someone's got to do it).

Cleat Education, L404V3 Caveats, and a Game of Inches

The new New Balance L4040V3 is available at Amazon starting at around $45 (and customizable up to $130). The product has been rated a 5.5 out of 6 by 122 reviewers, and it is lightweight, breathable, and made for speed. Regardless of the position you play on the field, it is not a shoe that is going to slow you down. weighing in at a little over three-quarters of a pound. It really is a featherweight in the category of baseball cleats, and there are few competitors in its weight class.

But all of the fleet-of-foot technologies that went into the making of the NB cleat do, evidently, come with some caveats, and the synthetic outsole is reported by some consumers to be not as durable as leather. Also, some consumers claim that the NB shoes run small and that the midsole technology is not all it is cracked up to be. Not necessarily a caveat, but another important factor to consider before you purchase is that metal cleats are not allowed in all baseball leagues, and youth and intramurals, by and far, have banned them.

So do the pros of the New Balance L4040V3 outweigh the cons? Does speed matter more than durability? Well, let's take a look at a popular baseball axiom by Bob Feller to try to find out:

"Baseball is only a game, a game of inches and a lot of luck."

While it is unlikely that Feller meant this comment in a literal way (he was referring to the minutia of playing a game during a time of war), it may have, in fact, been a truer statement that he realized. Especially in a day and age where "America's favorite past time" has dug itself eyeballs-deep into a mud pit of metrics and analytics.

Seriously, though, consider how many times the measurement of an inch can profoundly impact the outcome of a baseball game. If a pitch that is thrown one inch off the plate, it can result in a baserunner, a hit batter, or a run scored (if the bases are loaded). One inch off the rubber, for a pitcher, at the wrong time during a pitch can also mean a base runner or scored run.

Moreover, one inch to the left or right of a foul ball line can mean the difference between at hit (live ball) or a foul ball and another pitch, and one inch less on a runner's lead can mean less of a chance of a stolen base, while one inch too much can lead to being picked off. One-inch is the difference between a home run, a multi-base hit, and, in some stadiums, a fly ball.

What is more, one-inch can be the difference between being called out or safe, or lead to a pitcher 's advantage or disadvantage, as evidenced when MLB raised or lowered the pitcher's mound (once in 1904 and once in 1969).

Perhaps a metaphor for life, as one website points out, the game of inches must also be affect speed. And that is where the New Balance L4040V3 comes in. It is assumed that most of the fastest players in baseball can cover 90 feet (the distance from home to first, first to second, second to third, and third to home; and the distance of the pitcher's mound to home, if anyone is counting) in about 4.0 seconds.

Former Yankee, Ichiro Suzuki is pretty fast on the bases, and he is also known for wearing an Asics Cleat that is made of approximately the same synthetic material and weight as the L4040V3. Is one of the reasons he is so fast because of the lightweight shoe? And wouldn't it be nice if we were Car & Driver and could run a side-by-side field comparison, only with live baseball players? Well, it is nice to dream, but you see where we are going. Lighter is faster, and Mike Finnegan and David Freiburger proved it in

So consider that one of the lightest cleats that Nike (the Greek goddess of speed) makes - the Lunar Trout 2 - weighs in at around 1.25 pounds for a set, and then consider if Ichiro was wearing those instead of his under 0.75-pounds Asics or the New Balance L4040V3. (Just consider it; our math is a little rusty). But, while you are chewing on that, also consider that David Ortiz (before his retirement), Dustin Pedroia, Evan Longoria, Jose Bautista, and the hard-hitting Miguel Cabrera all endorse New Balance.

Yet, we encourage you not to be a New Balance fanboy simply for the sake of being a fanboy. Consider a couple of different factors when you are buying any shoe or cleat. In terms of cleat style, there are, essentially, three to choose from: metal cleats, molded (plastic) cleats, and turf/trainer shoes.

While experts will claim that metal cleats offer superior traction, like studs on a tire, plastic cleats do not wear down as fast. Additionally, many youth leagues and intramurals will not allow them for safety and field maintenance reasons, so check with your organization and local rec field before buying metal cleats.

As far as materials go, you will pretty much find two flavors: leather and synthetics. While leather is generally strong and more durable, it is also heavier, less breathable, and, in general, more expensive. Another indicator of the cost will be determined by what kind of ankle support you need. While cleats, by and far, now come with bolsters to maximize comfort and prevent the formation of painful calluses (if only they had such innovation while we were growing up), you will have to choose between a shoe that is a "low-top, mid-top" or "high-top."

The extra fabric used for mid-tops and high-top will generally be reflected in the final cost, and the cleats will be heavier as a result. For players with weak ankles, this isn't much of a choice, but it is important to be familiar with the choices.

Comfort is not a luxury when it comes to cleats, and there is a fine line between a light, speedy shoe, and an uncomfortable speedy shoe. Manufactures of cleats have added more and more cushioning is over the years, despite the frantic race to invent the "world lightest shoe," and with good reason.

The average length of a 9-inning baseball game is around three hours. However, there have also been some real MLB marathon-type games, and the 2015 Red Sox vs. Yankees rivalry at Yankee Stadium was one of them. The game started at around 7 pm and did not end until 2:15 am. As one online article put it, "Yankees first baseman Mark Teixeira was age 34 [when the game started], and when it ended, he was age 35."

Add to that an almost seven-hour grudge-match between the Tampa Bay Devil Ray and Baltimore Orioles and a 7-hour-six-minute affair between the Philadelphia Phillies and Colorado Diamondbacks in 2013. But the longest game in modern MLB history happened in 1984, as the Milwaukee Brewers and Chicago White Sox squared off for an eight-hour-an-six-minute stand-off, while the longest professional baseball game ever played came in the form of a 33-inning, eight-hour-and-twenty-five-minute stare-down between the Triple-A Pawtucket Red Sox and the Rochester Red Wings.

The point is, of course, that shoe technology is great, but to play the game of baseball, you really need a pair of comfy shoe.

Offering a bevy of new shoe technologies, a comfortable design made out of water-resistant breathable material, and one of the lightest cleats on the market, New Balance is clearly committed to athletes "achieving their goals." Plus, they manufacture products right here at home and work will well-known pro athletes when selecting materials and designs.

For years, the knock on New Balance has been that their athletic shoes are, by and far, too expensive. And, although the price on many of their shoes may be few bucks more than the next guy's, we did not necessarily find that to be the case for New Balance L4040V3 Baseball Cleats. We took a sample from Google search for the show, and this is what we found:

In fact, the starting price point seems to be right on par with what similar products from Mizuno, and Under Armour are priced at. Plus, NB routinely provides more sizes and widths for their shoes than any other shoe manufacturer. And their products are made in the U.S.A.

So, while they may not hit a home run every time with every single product, at least the company feels more accessible than, say, the sports shoe juggernaut, Nike (who manufactures their products overseas), and that, no doubt, falls right in line with what immigrant-turned-entrepreneur, William J. Riley would may have wanted. It is almost certainly what New Balance means when they say that they do things "their own way."

And in the world of cookie cutter sports equipment, we can all be glad that some out there does.

END_OF_DOCUMENT_TOKEN_TO_BE_REPLACED

There are 0 comments on "New Balance L4040V3 Baseball Cleats"