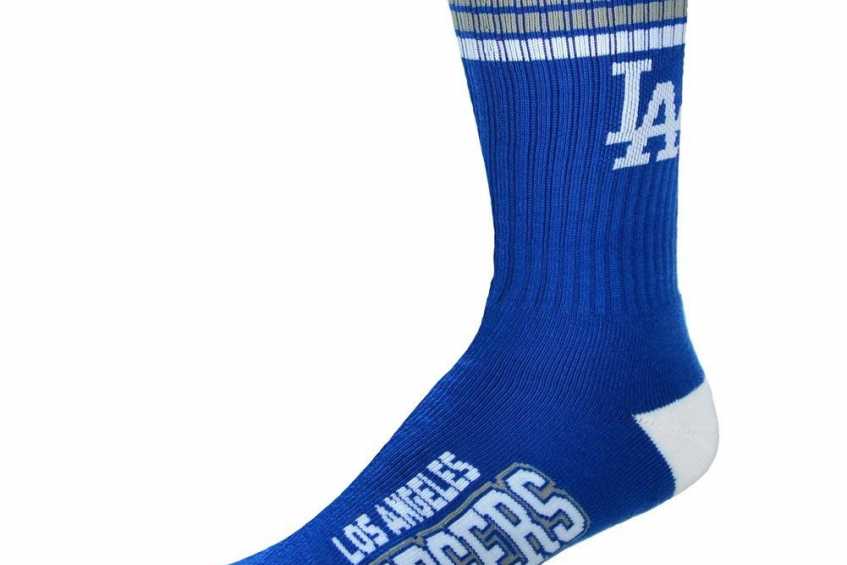 Los Angeles Dodgers 4 Stripe Crew Socks from For Bare Feet Shops are high-performance athletic socks that boast a logo that is officially licensed from MLB. In fact, all of their sports logos are officially licensed from the proper leagues (more on this later), and you can find socks, apparel, gifts, accessories, and more, all with your favorite teams' logo printed on it.

The sock itself is made out of materials consisting of 83% Acrylic, 14% Polyester, 2% rubber, and 1% Spandex. The men's pair of Los Angeles Dodger 4 Stripe Cre Socks fits foot sizes 10 through 13, and the sock is machine washable. You can pick up yours at just under $15 on Amazon or any official MLB outlet or even eBay.

Of course, for you Luddites out there, you can always swing by one the For Bare Feet Shops many retail locations across the Midwest and in California, or you can even schedule a visit to their 225,000-square-foot factory headquarters in Martinsville, IN.

For Bare Feet, Inc. has been in the sock business for over 30 years. The family-run business was started in 1984 by a former 5th-Grade teacher, Sharon Rivenbark, who reportedly borrowed $1,200 of start-up money from her folks to set up shop space and but a custom knitting machine.

The idea was that the shop would be a gift to her son, Tim, who had to quit college because of a brain tumor. Athletic and outgoing, it was a gut-wrenching order to see him undergoing life-saving surgery, and be told by doctors afterward that effect of the tumor would still worsen Tim's condition over time, eventually killing him.

The doting mother, of course, wanted to do all she could to create a meaningful place in the world for her son, somewhere, he could go and work and feel important. As it turned out, Sharon was a whiz at knitting, and the custom sock business soon took off, becoming an almost overnight success.

As the story goes, wealthy business owners and vacationing investors soon took noticed in the unique custom sock idea and started placing orders immediately. With business booming, sadly, Tim passed in the winter of 1987, and the grieving mother knew she had to carry on in his memory.

But, with origins based in the wholesale sock market, the jump to retail seemed years away. Then, finally, in the late 1980's For Bare Feet Shops made their jump to retail and opened shops in Indiana, Illinois, Colorado, Arkansas, Tennessee, Michigan, and California, while maintaining manufacturing presence as well as the quality standards that folks had come to rely on.

Before we dive back into the Los Angeles Dodgers 4 Stripe Crew Socks, let us just take a brief aside to describe the relationship between For Bare Feet and professional sports leagues and the importance of officially licensed apparel.

The FBF Originals 225,000-square-foot factory in Indiana pumps out thousands of socks each day and reportedly holds contracts with hundreds of NFL, NHL, MLB, NCAA, and NBA teams, according to an article published in 2014 by Indiana University. The company reportedly makes so many socks that their vice president of marketing, Jason Gater says he doesn't even have a specific estimate as to exactly how many.

The fact that Gater doesn't know how many socks the company produces in a day may be shocking to some, but it pales in comparison to the dangerous game that some sock and apparel companies are currently playing. Stop and consider for a moment how ferocious Disney is in protecting its copyright on its characters and franchises.

Surely, we all remember Disney taking legal action against a Pennsylvania theater group for its mere references to Disney works including, Wicked, Jersey Boys, Mary Poppins, and The Lion King in 2013.

Well, pro sports league are just as ferocious, if not more so, in protecting (and making money off from) their images and logos.

These leagues and their affiliates generally make a ton of money off of their recognizable logos, mascots, color-schemes, and slogans, and companies and folk who want to use this intellectual property, or likeness, cannot legally do so without paying for a license. And, while it may be true that there are so many scammers and cheaters out there, that you may not get caught (right away) by the NFL, MLB and other league authorities are regularly consistently scouring the nation for unlicensed merchandise.

Moreover, the penalty is not usually just a slap on the wrist, as proven copyright infringement or trademark violation can carry a maximum penalty of up to $150,000 per infringed work. And if you think you can make an image that is close enough to the real thing, just know that most legal cases have been decided in favor of the leagues using some of the following criteria.

So, you see, it is rather a good thing that Sharon Rivenbark happened to meet Marcie Davis, Indiana University's director of retail shortly after opening her sock shop in 1984. This chance meeting led to a key business ally as well as national college affiliation that BFB Originals still has today.

Unfortunately, no matter how many times you try to do things the right way, you just get the short end of the stick, and, in 2015, the NBA announced that it was giving FBF's contract to provide all on-court socks to an upstart company named Stance.

FBF Originals has been the NBA's on-court sock since 1999 and had seen the league through any unusual and sudden sock requests, like when the Indiana Pacers' superstar shooting guard, Reggie Miller and the rest of the team shaved their heads in solidarity and insisted on wearing black socks and shoes as they faced off against the Chicago Bulls for the 2011 Championship.

Miller and the gang got their socks just in time thanks to the longstanding goodwill between the NBA and FBF. Years later, Philadelphia 76ers' superstar point guard Allen Iverson made a similar request, and, again, FBF stepped up to support the future NBA Hall of Famer and his team.

Luckily, FBF retained licenses to use NBA images and logos, their sock just would not be worn on the court for games. FBF President, Kelley Baugh claimed that, from a retail perspective, it did not change a thing. But it was evident that the decision hurt. How could it not?

FBF Life After the NBA Means Puppies and Baseball

Despite the drama, though, Baugh said: "œFBF Originals maintains a good working relationship with the league and still has licensees for each of their four main professional leagues and the WNBA and MLS."

Plus, there is life after basketball, believe it or not, especially in terms of puppies!

That right. FBF focuses on light and whimsical subject matter as well as sports, and some of their subject matter includes dog and puppy patterns and cat and paw prints. You'll find rescued animal themes, and, of course, some of the more avant-garde selections including Dog Stripes for 8.95 and Cat Nip for $10.95

And, of course, there is always baseball and the officially licensed Los Angeles Dodgers 4 Stripe Crew Socks are a particularly good choice, which you can get at this official MLB shop for $12.99. But FBF is licensed to print any professional baseball team's logo so don't worry if you do not see your team right away, and do not be afraid to call and ask. Show everyone you're true gameday colors with FBF's Los Angeles Dodgers 4 Stripe Crew Socks.

The Los Angeles Dodgers are a pro baseball team out of Los Angeles, California, but the team was actually founded in 1883 in Brooklyn, NY. It wasn't until 1958 that the franchise packed its bags and moved across the country, and five years later, moved into its permanent residence of Dodger Stadium.

As a franchise, The Dodgers have had a particularly successful go of it, and their team history indicates that they rank fifth on the list of teams with the most World Series wins. In addition, the team has claimed 22 National League pennants, eleven National League MVP award-winners, and eight Cy Young award-winners.

All of that is, admittedly, impressive, but, hey, we are not telling you-you should be a Dodgers fan, we are just saying there is a lot to cheer about, including the vibrantly colored woven-in design prominently display in two places on your Los Angeles Dodgers 4 Stripe Crew Socks.

Not only does FBF license sports logos, the company is always pushing the envelope of new designs. Just this year, For Bare Feet has agreed to partner with Haas Outdoors, Inc. and their Mossy Oak brand of camo to bring the hunting and sports worlds just a little closer together. The upshot is that your favorite teams will now be available on popular Mossy Oak camo-patterned socks, like the trademarked styles of "œBreak-Up Country, Mountain Country, Bottomland, Shadow Grass Blades, Winter Brush, Break-Up Pink, Winter Brush, and Blaze."

"œProducts as creative and well-designed as these are what make partnerships like this so exciting," said Chris Paradise, Mossy Oak's Senior Vice President in a quote on the subject. Headquartered in West Point, Miss., Hass Outdoors, Inc. is the parent company of Mossy Oak, BioLogic, Nativ Nurseries, Nativ Living, GameKeepers, GameKeeper Kennels, and others, and it has a longstanding reputation for providing quality gear at an affordable price.

It is also worth noting that Mossy Oak comes with many sporting goods connections, and it is the official camouflage of the National Wild Turkey Federation, Ducks Unlimited, B.A.S.S., and Cabela's Collegiate Bass Fishing Series, among others.

Although we can't yet find the Los Angeles Dodgers 4 Stripe Crew Socks in Mossy Oak on the web, we suspect it is only a matter of time. For that matter, you can probably get a camo puppy print, too.

The sock's moister wicking acrylic fibers, its strength and durability, and its odor-fighting properties will, no doubt, make it a perfect match for all kinds of recreational activities, and it will only expand the appeal of a sock company that started out as a one sewing machine venture to create a place in the world for a child with cancer.