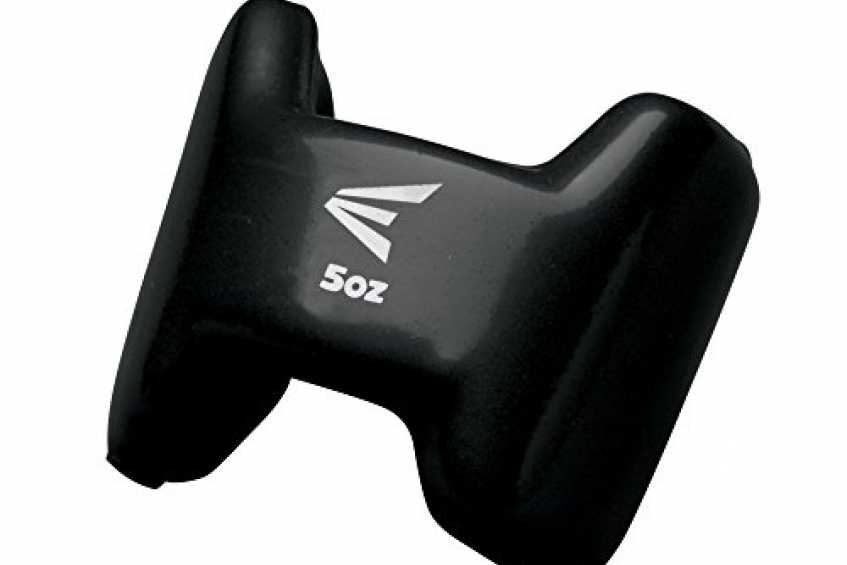 Over the years, baseball has developed into one of the most competitive sports in the U.S. While the development of the sport is good news for fans and those who make a fortune off it, it also means more innovative training regimes for players.

Today, being able to throw or hit a ball does not cut it. You have to hone your skills to stay relevant in a sport that keeps recruiting new players each and every season. Hard work on the training ground is not enough either you need to think outside the box to stay ahead of the pack.

Of all the playing positions, hitters are having the hardest time when it comes to stiff competition. As such, batters are now using bat weights to build on their swing speed and bat control.

Easton is one of the leading manufacturers of baseball bat weights. Since it was founded in 1922, the company has stayed true to its dedication of producing quality products. Its products are not only top-notch but also affordable.

So without further ado, let's find out what Easton has to offer when it comes to baseball bat weights.

Here's an in-depth review of each Easton bat weight.

As the name suggests, the Easton Speed is designed to train your muscles to react faster when hitting the ball. Even though it's weight might seem negligible, you will be surprised at how much five extra ounces can do to your agility with the bat.

The 5-ounce Easton speed bat weight is not for those who want to build on strength it's too light for that. However, it can be used to turn your hands into unbeatable speed merchants. With fast hands, comes faster swings and better bat control. These features are important to any baseballer.

The Speed bat weight can also be used for live hitting during training, and for warm-ups before a game. Unlike most bat weights on the market, the Easton Speed does not slip off your bat every time you swing it. It also has a compact build which makes it easy to remove from your bat once you are done using it.

In terms of color, the 5-ounce Speed does not have variety it only comes in black with white markings on top indicating its weight and the Easton mark of quality.

Similar to the 5-ounce Easton Speed bat weight, the Easton XL 10oz is designed for live hitting. It is the perfect bat weight to alternate with the 5-ounce Speed weight. With this combination, you not only improve your swing speed but also your swinging power.

When it comes to design and build, the Easton XL features a solid construction that perfectly wraps around a bat to give you a compact, comfortable feel.

The only problem with this bat weight is the lack of variety of colors available. The Easton XL comes only in black. But that doesn't mean that it has an unattractive build. The Easton has a sleek design. It bears the Easton brand sign on the top and an indication of its weight right below it.

Like the 5-ounce Easton Speed bat weight, the Easton XL does not adopt a donut shape. Instead, it comes as a stocky block that wraps around your bat with unrivaled grip.

This 16-ounce Easton bat weight is designed to help you build on three important aspects overall swing strength, swing speed, and bat control. Weighing at just 16 ounces, this bat weight is heavy enough to strengthen your muscles with every swing.

Unlike the Easton XL and Speed, the Easton 16oz bat comes in a donut-shape. But one advantage that this bat weight has over its preceding counterparts is the fact that it comes in a number of beautiful colors including royal, blue, or solid black.

Its donut shape and anti-slip construction give it a firm grip on the bat. The diameter is slightly above two inches, allowing it to fit into any MLB bat without slipping out. The solid build is tough enough to withstand heavy hitting unlike most models in the market.

In terms of application, the Easton 16oz bat weight can double up as both a training bat weight and a pre-game warm-up weight. In the world of bat weights, sixteen ounces is the sweet spot. It is not too heavy to wear out your muscles during warm-ups and not too light to be ineffective.

Nonetheless, the Easton 16oz bat weight works best when used as per the manufacturer's instructions "” it should only be used on deck.

Not only will the Easton 28oz bat weight help you build unbeatable strength, but will also improve your bat control and agility.

Like a true Easton product, this 28-ounce bat weight comes in a compact construction. It is made of long-lasting vinyl covered in cast iron that can withstand heavy bat use. It also comes in the shape of a donut that perfectly fits on different bat sizes. It is not the kind of weight that might fly right off your bat barrel during swing practice.

When it comes to application, the 28oz Easton bat weight is best-suited for training. Being a heavy bat weight, it might not be a good idea to use it for your pre-game warm-up because it may wear your muscles out before the game and tamper with your rhythm. Although opinions may differ about this issue, it is not something you would want to risk especially during an important game.

In addition, just like most Easton bat weights, the Easton 28oz has limited colors. It only comes in black.

How Do Easton Bat Weight Compare to Similar Bat Weights on the Market?

One of the best ways to tell the real value of an item is to compare it with similar products from different manufacturers. Let's find out how Easton bat weights stack up against some of the best bat weights on the market today.

The Champro bat weight has a lot going on for it. For starters, it's affordable. In fact, it's one of the most affordable brands that produces high-quality sports items.

Secondly, it comes in a variety of colors, a feature that sets it way above most Easton bat weights. Unlike Easton bat weights which mostly come in black, you can have the Champro bat weight in grey, silver, green, red, black, or yellow.

The Pow'r Wrap Bat Weight is strikingly similar to Easton bat weights. Like Easton weights, they are durable and fit perfectly around the barrel of different bat sizes.

In addition, while Easton bat weights come in different sizes that can be used by both adults and young players. Pow'r Wrap bat weights are solely designed for adults.

DeMarini is another well-known bat weight on the market. Just like the Easton weights, the DeMarini is suited for both training and pre-game warm-ups.

However, it is edged out in one area "” variety. While Easton comes in a variety of bat weights ranging from 5 ounces to 28 ounces, the DeMarini only has 16-ounce and 20-ounce weights.

There are tons of bat weights out there. While this gives you the freedom of choice, it also brings with it a lot of confusion. To buy an Easton bat weight that perfectly suits your training regime, consider the following factors:

This is by far the most important consideration when shopping for bat weights. Before you think of buying a particular bat weight, compare its size to that of your bat and check whether it fits. Otherwise, you will end up buying a weight that you will never use.

As a rule of thumb, buy what you can handle. Don't be duped into buying a 28-ounce bat weight when you can't comfortably wield a ten-ounce bat weight. Do not go for a heavyweight if you are just starting out. Similarly, if you are a professional player, do not use very light weights.

Each league has its own regulations regarding what kind of bat weights players can use on deck and for practice. These restrictions can limit the weight or the size of bat weights that players use.

Therefore, it is wise to familiarize yourself with the regulations of your league before settling on a particular bat weight. Otherwise, you might end up buying an expensive weight only to realize that it not allowed by the governing body of your league.

The dilemma that many players face when shopping for bat weights is whether to go with donut or sleeve bat weights. Typically, donut weights fit firmly on bat barrels and will allow you to hit balls during practice.

Sleeves, on the other hand, distribute their weight evenly through your bat, making them perfect for honing your swing. Because of their design, the sleeves don't allow you to hit the balls.

The choice you make will depend on how you intend to use your bat weight. Is it for practicing your swing only, or do you also want to use it to improve your bat control and accuracy?

According to your skill level, ensure that you use the right bat weight for you. If you are a novice player, you would want to start with lighter weights and work your way up.

A player's age can also determine the size of bat to use, which in turn, determines the size of bat weight. Before you buy a certain weight, it is best to inquire whether it can be used by both adults and children.

Easton offers reliable and durable bat weights. When compared to some of the best weights on the market, they stack up nicely. So if you are wondering whether or not Easton bat weights are worth your money, you have your answer"” worth every penny!

Get your Easton bat weights today, and start building on your strength and swing speed.

END_OF_DOCUMENT_TOKEN_TO_BE_REPLACED

There are 0 comments on "Easton Bat Weights Reviewed"