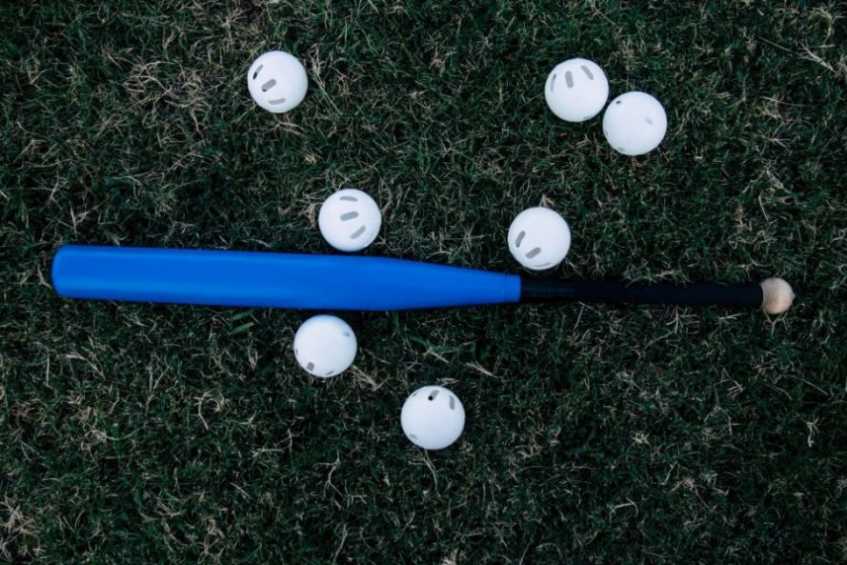 These are very challenging and productive baseball hitting drills, especially when coaches get good at flipping two balls and with calling which ball to hit, at the right moment.

Straight on one ball flips from a short distance are a good way for players to practice hitting mechanics and timing. Balls can be flipped to specific locations from this shorter distance and different speed flips can imitate game like speed changes. With one ball flips, players obviously know what to hit, so it is easy in that regard. Additionally, with one ball, they do not necessarily have to wait as long, and they can get away with a long swing.

After practicing one ball flips, coaches can move on to this two-ball drill for variation, and for a greater hitting and coaching challenge. The two-ball drill is similar to the one, with the only difference being that coaches flip two balls at once with the same hand. The balls usually separate by themselves, creating a higher pitch and a lower one. The separation is wider or narrower from flip to flip. When the balls remain close together, the hitter's bat control and concentration level is challenged even more. Occasionally the balls do not separate much and players may hit both balls with the same swing. Coaches wait as long as they feel the hitter can wait as the ball approaches before yelling high or low, designating which ball they want players to hit. Coaches can also use the terms fast or curve or fast or change, with the low ball being the curve or change up, to give the drill a more realistic game feel.

The two-balls flipped drill teaches players to wait, let the ball get deeper in the zone; develop a quicker bat and develop bat control. Additionally, it helps players understand where contact is made on different pitch locations out front on high pitches and deeper in the zone on low ones.

Coaches may have to practice flipping balls for a spell to get the feel of the release. The secret to good two ball flips is to concentrate on releasing the ball they plan on calling to the area desired, as if they were just flipping one ball. In this way, they will notice they control the ball that matters.

By waiting to call the ball as the balls reach the hitting zone, and not before or when they release them, coaches force hitters to wait and be quick, if they are to hit the called ball, which is the main objective of the drill. As with all hitting drills, backspin line drives to the field of the pitch location are the desired result. It may look relatively easy here but it is not easy for kids who lack the ability to wait and for those who lack bat control and bat quickness. Hitters, who guess which pitch the coach will call and do not wait to hear which one, will be exposed quickly.

A few variations to the drill are also helpful.

One variation has hitters not swing if the called ball is not a strike, making the drill even more difficult.

The second variation has coaches not call a ball to hit and has the hitter swing at the better of the two pitches. In this way, hitters must concentrate on getting a good pitch to hit. The choice of the better of the two balls may vary from hitter to hitter, depending on whether they are a highball or low-ball hitter. With that in mind, this drill may help batters discover which pitch location they hit best, the high or low pitch.

For very advanced hitters, giving them a count before flipping the two balls is another variation. For example, a no strike count has hitters only swing if the ball called is a pitch they like or the one they were looking for. A two-strike count means hitters must protect and swing if the called pitch is a strike or close enough to one.

With the two ball flipped drill, players will find that they can look for the high ball and still adjust to the low one, but vice versa is much more difficult. This idea is very game like and should be encouraged, as players can look fastball and adjust slow, or look high and adjust low.

As mentioned, this drill provides a coaching challenge as well as a hitting one. The good news is that, as coaches get better at flipping two balls and knowing when to call the pitch out, hitters will benefit from these baseball-hitting drills.