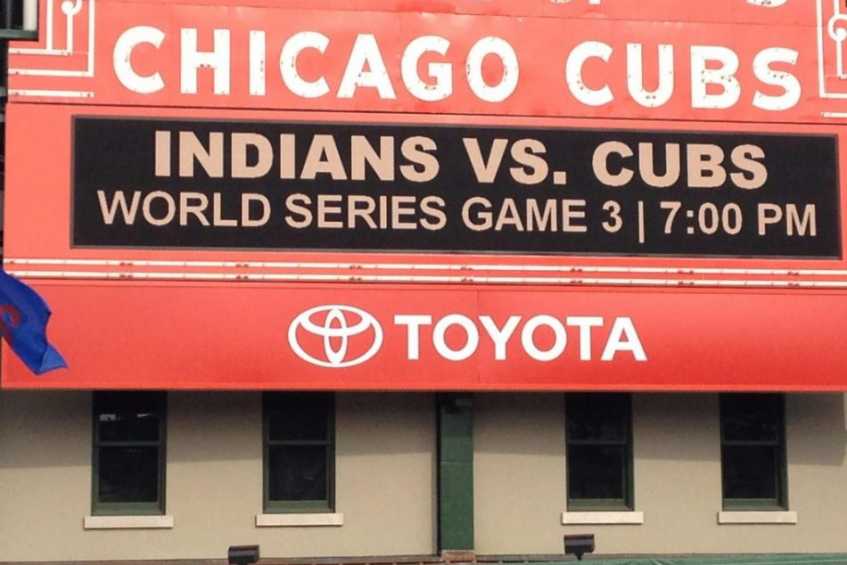 I've been getting asked a lot lately, as most Chicagoans are, I suppose, if I am for the Chicago Cubs to win the 2016 World Series. I answer that I am for the team that begins with a C, I mean the team in the blue jerseys, and the team that hasn't won a World Series in forever. Now that that that is cleared up?
My real answer is complicated. I played for the Chicago White Sox so I cannot root for the Cubs. Not really, I was only with the Sox for a short while, and they released me pretty quickly, so no great allegiance there, although I love my kids and they happen to be Sox fans. Then, I played for the Dodgers and the Indians, so there is some allegiance with them. Ultimately, my answer is that I want the best team to win and if that is the Cubs, so be it; I will be happy for them. I will say that the Cub players are extremely likable. The young ones play hard, the older ones have a lot of class, and all are a reflection of an inspiring manager. Having said all of that, I believe the Cubs will have many opportunities to win it all in the next few years with all that young talent. The Indians may not, so I will not be disappointed if they win the 2106 World Series. How is that for riding the fence?

Higher than the 2016 World Series?

In honor of one of my former teams playing in the World Series, the Cleveland Indians, I will begin with one of my favorite stories from my days there. It had nothing to do with my play there, as the good moments I had would cover a half of sentence at most. However, I will say a bad day or two or many as was the case in my Indian days, was still better than any day in the minor leagues.
Here is how things went down, I mean up. 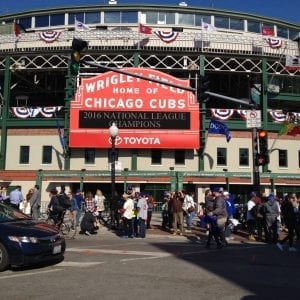 In a game against the Kansas City Royals at home in cavernous old Cleveland Municipal Stadium, Jerry Martin of the Royals hit a titanic shot completely out of the stadium, just foul. The following day during batting practice, a voice from high above came preaching. Was this the voice of God, perhaps with a message for how to get to the World Series, I wondered. With players looking everywhere, someone was pointing way up beyond the left field stands. Yes, maybe the biggest-of-leagues manager in the sky had arrived? Unfortunately, it was only one of our ace pitchers, notorious prankster and now Hall of Famer, Bert Blyleven (not God) standing on top of the left field roof.
How he got on the roof in the first place is not known, but having the bravery to go to such heights was impressive. Bert after waving his hands to get everyone's attention, proceeds to yell when all were looking, "Lary, Lary, this is where that ball landed," referring to the ball hit by Jerry Martin the previous day off of Indian's pitcher Lary Sorenson.
Such is the life in the big leagues, where pranks and joking around are constant and necessary.

Impressed with:
The Announcers: I know some people do not care for Joe Buck, but I am not one of those, and I enjoy John Smoltz analysis. I am a harsh critic when it comes to baseball analysis, as I cannot listen to many of them. Maybe I became spoiled by the one of a kind, Vin Scully. I often, turn the sound off during games and just watch, but I have not even noticed the broadcasts, which is a good thing. They do not catch everything but no one does, and I prefer a two-person booth to the three. The three "person" broadcast I should say, in deference to ESPN's Jessica Mendoza, often seems like a competition between the analyzers, which annoys me.
Unimpressed with:
The hitting in general. I understand that good pitching will beat good hitting a majority of the time and it's been cold, never fun to bat in that weather. But, maybe it's my TV, I do not like what seems like more of the trend now of players standing far from home plate. Years ago, the players who stood further from the plate were primarily interested in and capable of hitting balls to the opposite field, so standing off the plate was OK. They could look for balls away and take them to the different fields.
Now, batters seem to have one thing in mind, and that is hitting the ball far, and usually to their pull side. Standing far off the plate limits the number of pitches they can do that with and maintain a good fundamental swing. Being far from the plate does not help unless the pitcher makes a mistake pitch. Give me Anthony Rizzo, although he is probably closer to home than most players would be comfortable. He doesn't give the pitcher the outer half of the plate for free. 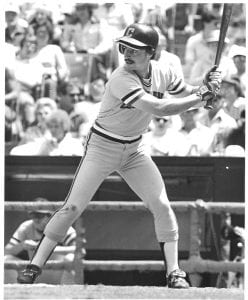 My best hitting season in the big leagues came while standing close to the plate and choking up more, as Rizzo does with a two-strike count. I am not saying I could have much success against the flame throwers of today, but the concept of staying far from the outside corner is only good for hitters that will hit the ball the other way consistently. Standing closer to the plate helped turn Daniel Murphy into a superstar hitter. Maybe with the success of him and Rizzo guys will begin to move a little closer, which would create more contact and higher batting averages, I believe.
Impressed with Aroldis Chapman:
You might say this is an easy one. But, to throw that hard without walking batters cannot be as easy as he makes it look. How cool it must be for the Chicago Cubs to face other hard throwing relievers from the opposition and be unimpressed because they only throw 95 miles per hour. "Nah, Nah, Nah, your guy throws 95, and our guy throws 8 miles per hour faster." Incredible.
Unimpressed with some batters:
Sorry but I say this every year. Too many strikeouts in the 2016 World Series. I know it is not easy and i have the same complaint each year, it seems.. The pitchers are so good and hard-throwing, but with two strikes why not cut down on the swing and hit the ball the other way, or at least try too. Smoltz has mentioned more than once how the curveball is making a comeback. The way to hit it is by thinking opposite field only chance unless it is a hanging one.

Other thoughts on 2016 World Series

Impressed with:
Kyle Schwarber. How can you not be? However, I have gone to spring training in the past, and some years I felt game ready from the start. Once the eyes get used to speed, the swing comes back pretty quickly for someone of Schwarber's ability. However, I am glad he was not cleared to play the outfield, as that could have backfired. Every out is crucial in the series and one misplay could change a game. The Cubs certainly know that from memorable playoff games of the past. I know coming back and hitting like he has so far is not easy, but I believe it would have been even harder to play the outfield after all that time off. Judging fly balls off the bat with little or no practice takes a longer time, especially as he is not a natural outfielder by trade. Great job so far to Kyle. He may even end up the MVP with a clutch pinch hit or two.
Finally, impressed with:
Francisco Lindor, shortstop for the Indians. So young and good, and unafraid to show the joy of playing the greatest game on earth. One of the new breeds of players, with personality.
Excite to see how this 2016 World Series plays out. Go team!
#2016worldseries